Actor Hyun Bin who is currently promoting his upcoming film, also known as Bargain, was asked about his newborn baby boy and the new father made some important remarks. 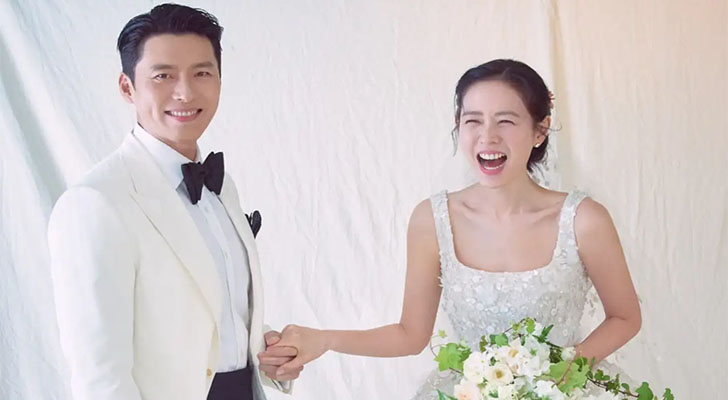 South Korean actor Hyun Bin and actress Son Ye Jin first confirmed their relationship in 2021. It was also revealed that the two were dating after the filming for their tvN K-drama ‘Crash Landing on You’ was done. The show was shot in 2019 and aired from the end of 2019 to early 2020 becoming one of the biggest shows in cable TV history. It also broke the viewership records for its broadcasting channel, by achieving over 21 percent viewership nationwide and over 23 percent viewership in the Seoul metropolitan region for its finale episode, making it the highest in tvN’s history. After revealing their dating news in January 2021, the world came in support of the onscreen couple turned real-life lovers.

On February 10, 2022, Hyun Bin and Son Ye Jin announced their engagement to fans and well-wishers through Instagram posts and confirmations made by their agencies. After a year and a few months of dating period, the two actors decided to tie the knot and were congratulated by those around them in bundles. The ‘The Negotiation’ stars, wed in a private ceremony attended by their close friends and family on March 31, 2022, at the Aston House at the Grand Walkerhill. It became dubbed as the wedding of the year as photos from their picture-perfect event were released to the world. Soon, the newly married couple jetted off for their honeymoon to Los Angeles, California on April 11, 2022.

On June 27, 2022, Son Ye Jin took to her Instagram to share that she is pregnant with her and Hyun Bin’s first child. She spoke about being blessed with a new life and being excited but also worried about the changes in her body. On November 27, it was confirmed that Son Ye Jin gave birth to a boy and both the mother as well as the new baby were in good health.

Hyun Bin joins actors Hwang Jung Min and Kang Ki Yong in this action thriller as a National Intelligent Service agent. During the promotional events for the upcoming film, the actor himself, actress Son Ye Jin and his baby boy were the point of attention of all media. He also answered fellow actor Hwang Jung Min question about if he was dating his wife when they were filming ‘The Negotiation’ and the actor was left baffled. Another interesting point has been his beard, which the star is currently sporting for the film’s activities and the internet is divided about their opinions on it. While on the other hand, his long hair is receiving all the love from the viewers who are commending his new look.

As Hyun Bin appeared on KBS2’s ‘Entertainment Live’ on January five, he was asked about the happy news in his life during the interview segment ahead of the movie’s premiere. The actor replied that his last film, ‘Confidential Assignment 2: International’, received great results at the box office as close to 7 million moviegoers enjoyed it according to reports. However, he noted that people must be curious about the other happy news in his personal life, which is the birth of his baby. As the interviewer raised a question about the looks of boy BinJin, asking if he resembled his father or mother more, the actor wondered and responded that though he wasn’t sure at the moment, he has heard that the baby’s face changes a lot as it grows. So while for now, it looks a bit of a both like his parents, in the future, the results could be on one side. Hyun Bin expressed his own curiosity about this.

Whoever the baby looks like, we’re sure he’ll be a heartthrob thanks to the undeniably fabulous genes of his mom and dad.

The plus factor in Hyun Bin’s life

In another interview, the 40-year-old was asked about what makes them ‘plus’ meaning bigger than they were in a literal or metaphorical sense. Father Hyun Bin pondered for a bit before giving the credit to his family. He remarked that currently, it would have to be his baby and his wife. The love in the actor’s eyes as he spoke about his beloved was unmissable, so the fans noted that. Hyun Bin has been very jolly throughout all his recent appearances and his fans have been very glad about it as they look back at his personal and professional growth in the last few years. Following the success of his many projects, he has become a global name and carries the influence of Hallyu with all his actions. He is easily one of the most loved Korean actors in the world at the moment.